Since the last post in July we have held a meeting each month. As well as monthly litter picks we have been busy clearing footpaths, removing large logs and branches from the dipping pond (damselfly pond), We have now 'pinned down' the large logs to make it more difficult for them to be rolled into the water. Some fencing was repaired to the east of the main pond that had been damaged, probably by being climbed over. We've covered a bridge along the main bridleway, down near Lower Bedfords Road, with chicken wire as it was getting a bit slippery.

We've also been involved with 2 EWT events, Apple Day in October and their Christmas event. We had a table at each and sold cakes to raise much needed funds. We have to pay our own insurance and the money raised covers this cost for us. 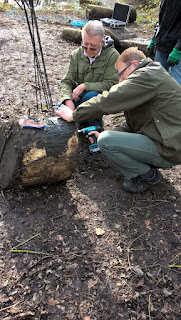 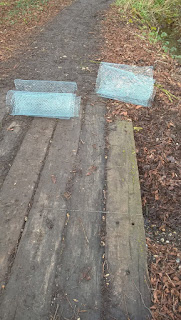 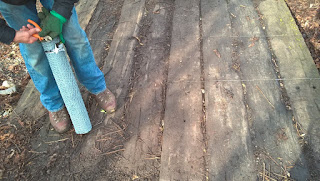 12th July 2015. Today we installed a new step on a slope to the west of the main pond. This slope gets particularly slippery and difficult to negotiate in the wet weather. We may install  further steps here later in the year but this was our last usable 'step' so we need to buy some more sleepers. . Litter picking was also carried out as usual and some tidying up and watering in the Walled Kitchen Garden. Here are a few pics of the day's step building: The first shows the perils of allowing an inexperienced wheelbarrow pusher loose! More training required maybe. No one was injured. 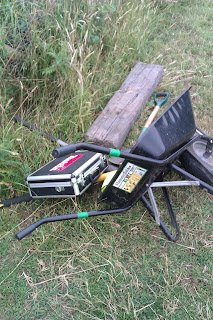 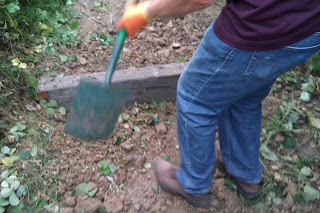 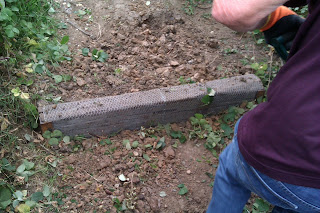 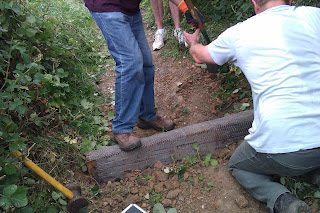 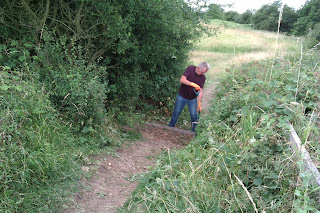 This year we've been carrying out various tasks in the park. Each month we've carried out a litter pick. Much to our disgust we collected over 150 bags of dog poo in the Northern end of the park, most from one area and we suspect this to be the work of one person, and presumably their dog, or dogs, as most of the bags were small Tesco ones. We've cleared fallen tree branches, repaired fences, cleared the ditch alongside the main bridleway down to Lower Bedfords Road.
Posted by Bill at Wednesday, June 10, 2015 0 comments

What's been going on in Bedfords Park

Many apologies for the lack of information over the past few months. No excuse !!

Recent work parties have continued to litter pick, clear ditches, remove fallen trees from main track south of the visitors' centre and ditch. Repair fencing to the west of the main pond. We cleared the path in the south of the park that we built some years ago as this had become overgrown with brambles, nettles and a couple of fallen trees also had to be cleared. New steps were built to the north west of the main pond as the slope had become very slippery. 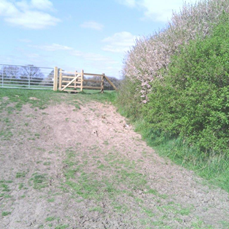 We had a cake stall at EWT's  (Essex Wildlife Trust) Easter Event which raised money for our funds.

We have also helped out at EWT's  11th birthday event in the park and we also had a tombola and cake sale which raised more money for our funds. In case you're getting the idea that we are making loads of money we ought to point out that most of the money raised goes towards out annual insurance that we have to take out as part of our agreement with the council when we became an approved 'friends group'.

Here is the latest report from one of our members: (dated 17th March 2014)

In complete contrast to last year it has been a fine early spring. Most of the Prunus cerasifera (Cherry Plum) blossom has already gone over in the park and Prunus spinosa (Blackthorn) is coming out now. Many butterflies enjoyed nectaring on the former and also on Sallow blossom. Some of the sallow catkins have gone over already as well and one near the lake was covered with bees on 9th.

Bird news:  Daniel saw a Red Kite flying over the park on 8th March. March and April are often good months to look out for this majestic raptor, which usually involve passage/wandering birds. The first migrant birds are arriving in the park with 3 Chiffchaffs and 1 Blackcap all singing on 16th. The chiffs were in full song and had probably arrived a few days earlier. When they first arrive they tend to feed constantly (after a long migration in this case wintering in the Med) and sing more subdued or sporadically.

It has been one of the best early springs for butterflies, certainly in recent years.

All of the hibernating species had a good late summer and autumn last year and with this good start will hopefully continue to thrive in 2014.

Pam saw a White sp probably Small on 13th. If the warm weather continues the species which overwinter as pupa should all appear before the end of the month (this includes some Speckled Woods, Holly Blue and the other Whites incl Orange Tip). Watch this space!

I visited Havering Country Park on 12th - lots of butterflies here too including a total of 34 Commas!

The first four photos were taken in Bedfords Park on 16th March - two different Brimstones one with a little nick along the edge of the hindwing near the 'tail': the remainder in Havering Park . 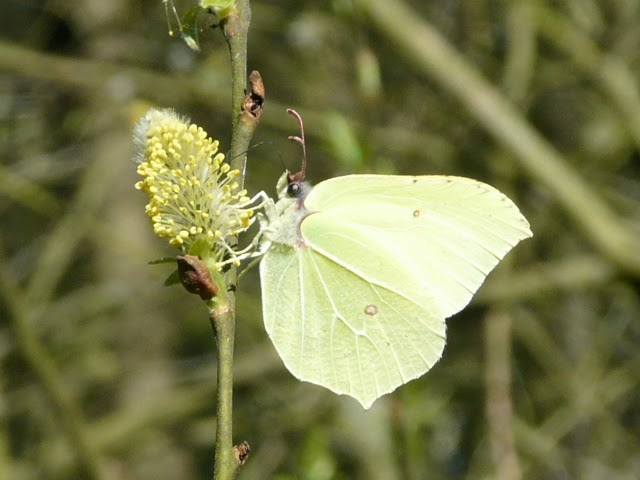 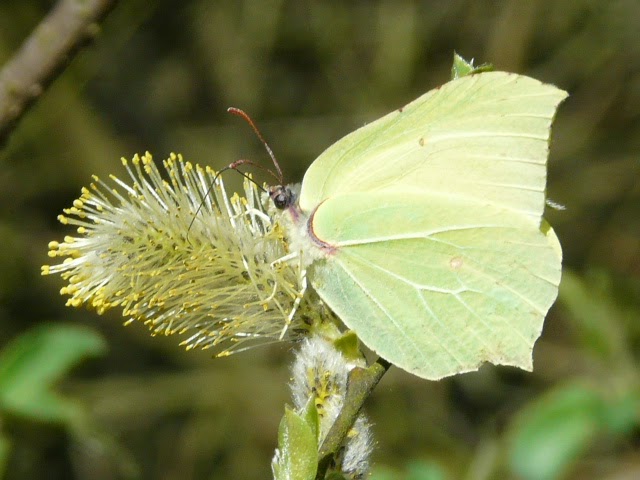 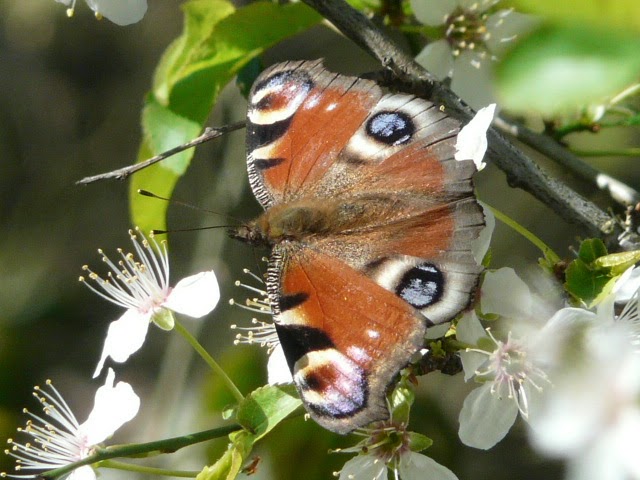 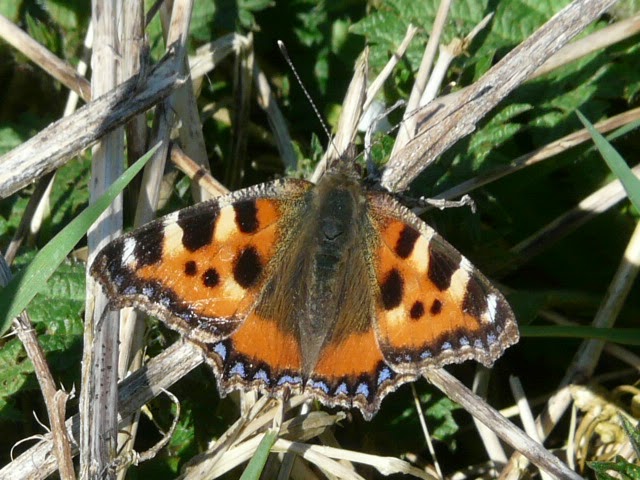 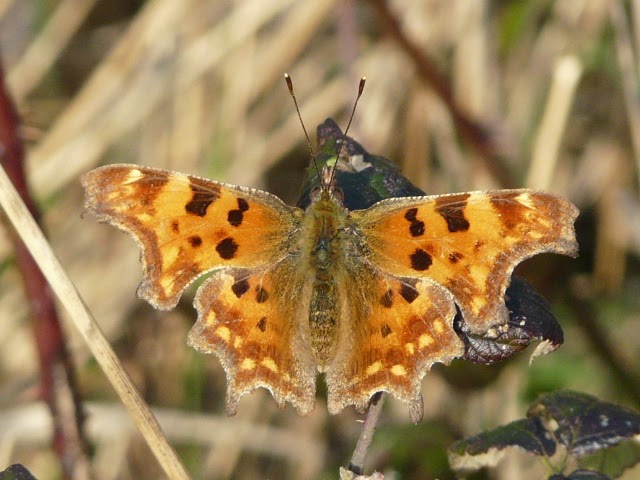 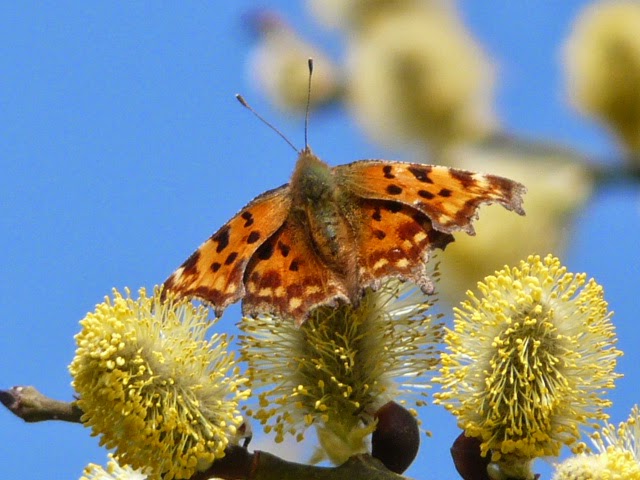 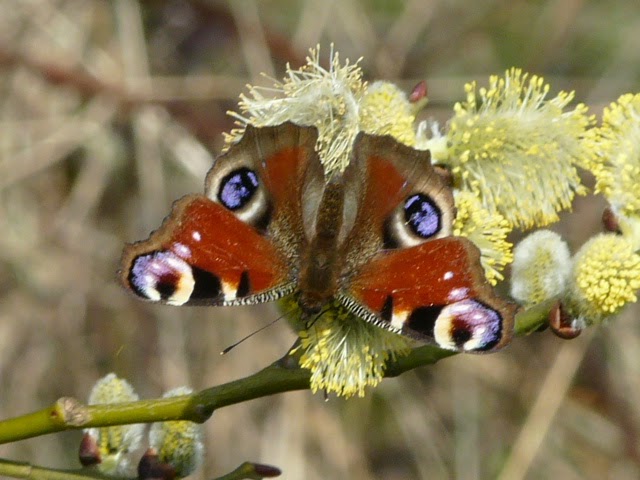 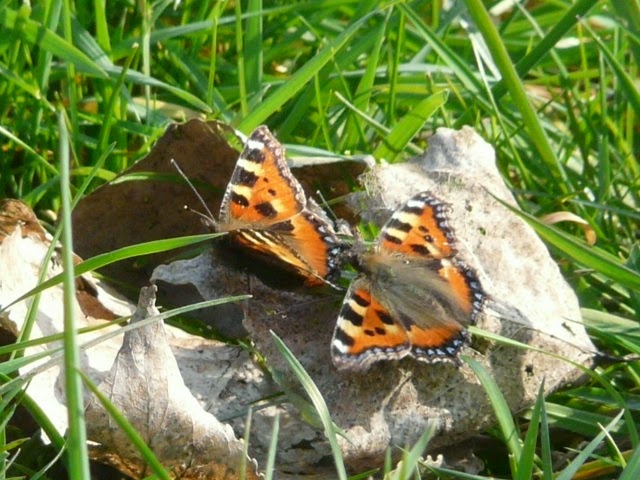 Following  info on wildlife spotted in the park so far this year:

Birds recorded in the park so far this year are listed below. Still a few common species lacking which I have normally seen by mid-January (eg Meadow Pipit, Tufted Duck). If the weather improves (less rain) I will try some dusk visits for owls, Mandarin Duck and Woodcock; also some early morning visits. The Peregrine Falcon was reported on the SE Essex RSPB site on 14th by two visiting birders - seen over Larch Wood. I still need this species for my BP list. I have seen Peregrines over Gidea Park on two occasions which is not far away and there is at least one previous park record; all presumably wanderers from Romford Town Centre.

The 2 Firecrests continue the regular occurrence of the species for the site (fifth consecutive winter since 2009).

A few butterflies have already been seen this mild February at a number of sites particularly from the 16th. I finally caught up with my first in 2014 in the park yesterday. 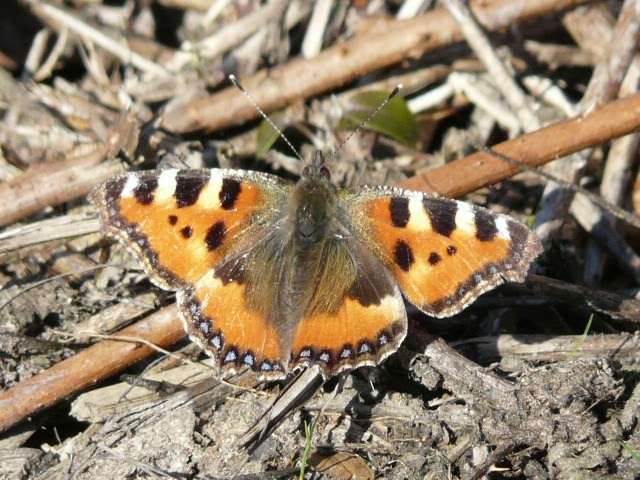 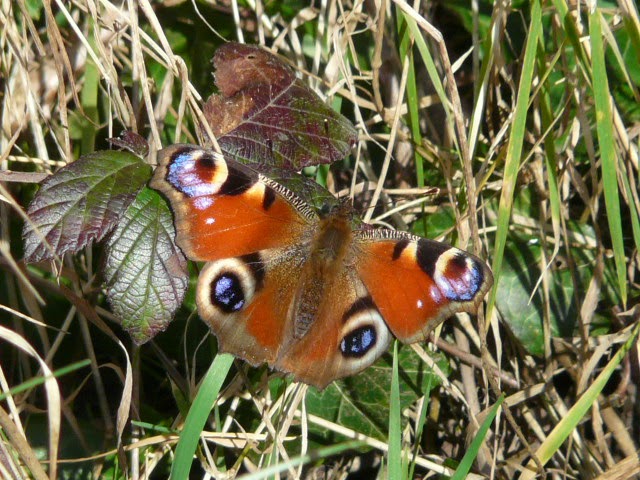 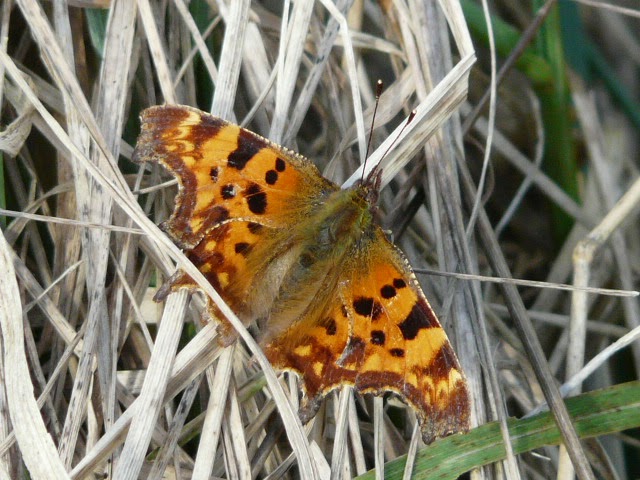 I also disturbed a basking Grass Snake which slithered off before I could take a photo, the earliest I have seen here out of hibernation.

With the mild weather it remains very quiet for birds wintering in the park but many are singing. The plant growth is so in advance of last years very late spring. Prunus cerasifera is out in full flower but I could not find any nectaring butterflies on it - a few bees. 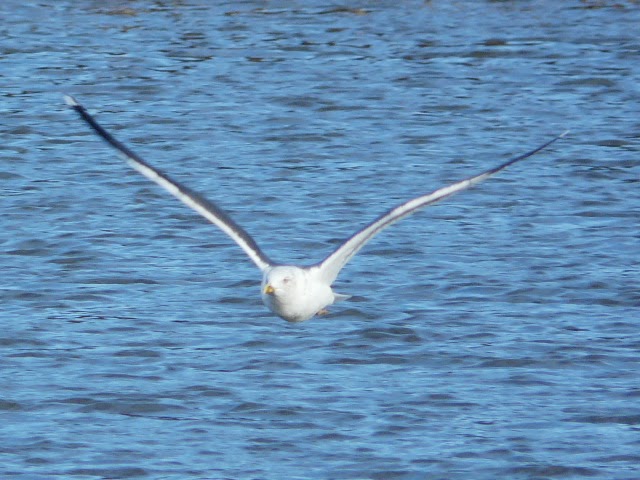 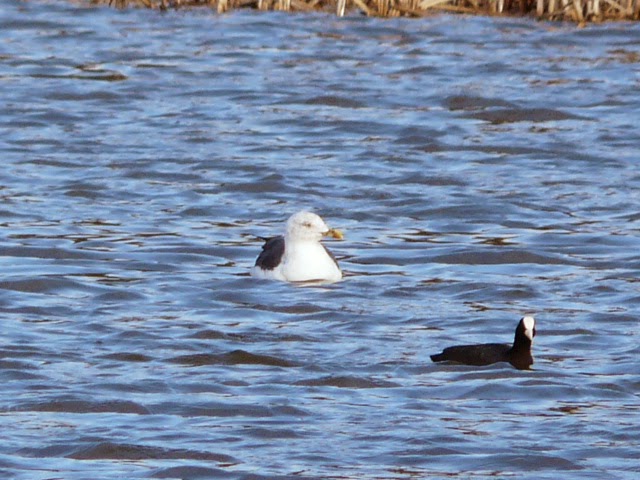 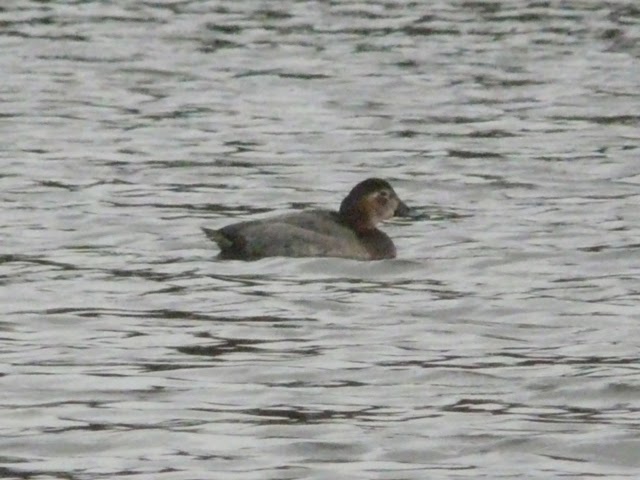 This work day, just for a change' we decided to continue mulching the areas near to the visitors' center and, at last, we've used up all the mulch! We also carried out our usual litter pick. The litter we collected this time included a TV which was dumped in the visitors' center car park, a printer, a bag of plastic toys and a box of drinking glasses. These were all dumped by the recyclable bins in the main car park. Why ??? The glasses fitted in the glass container anyway so we did what someone else couldn't be bothered to do. Some of the toys were taken to a local charity shop. The Council (that's you and me) will have the expense of disposing of the tv and printer. The rest of the rubbish was the usual sweet wrappers, plastic drinks bottles, plastic bags, drinks cans etc etc. Most of this could have been taken home, or at least put in the bins provided. Never mind, we really look forward to picking up other peoples rubbish every month. 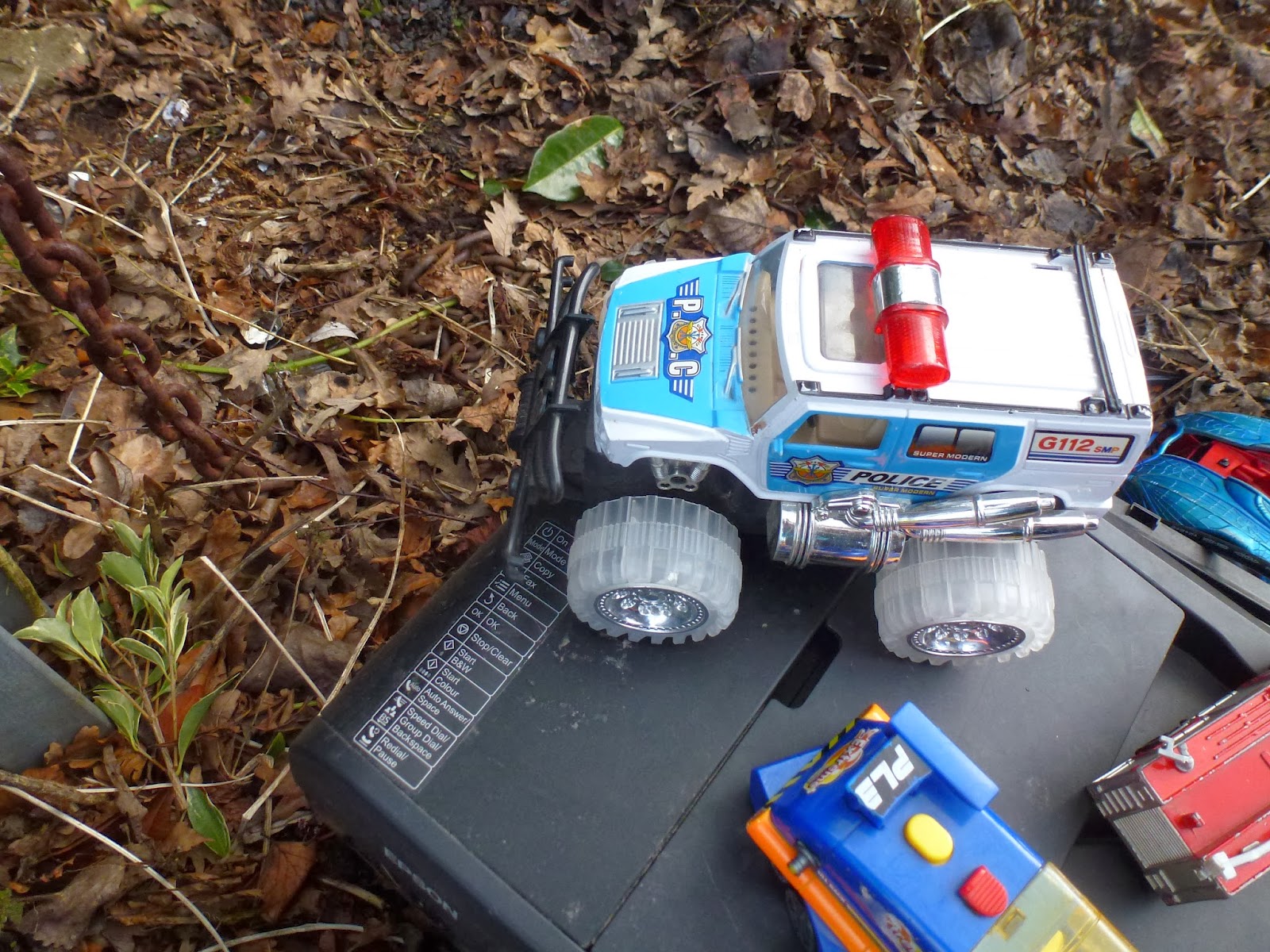 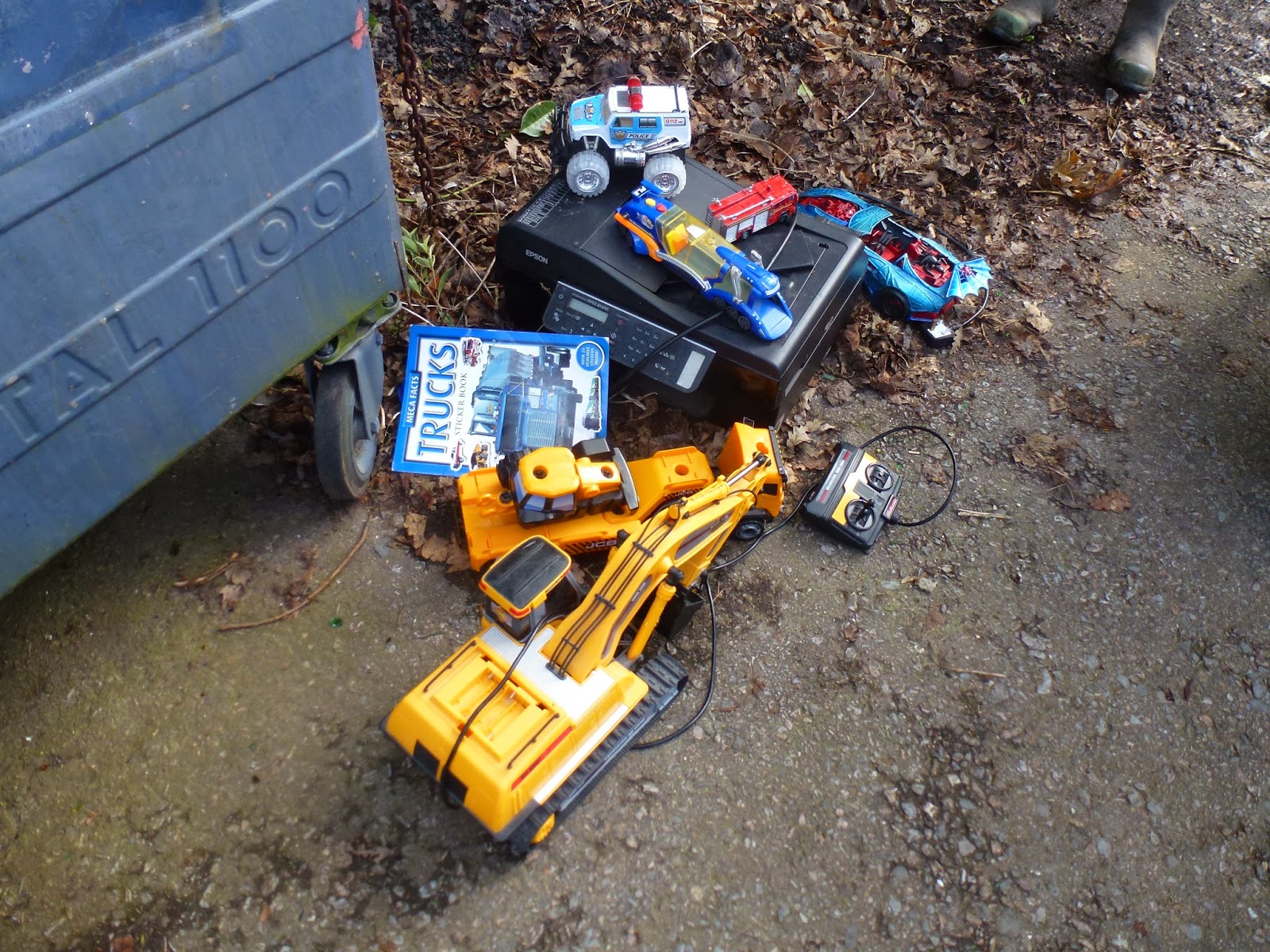 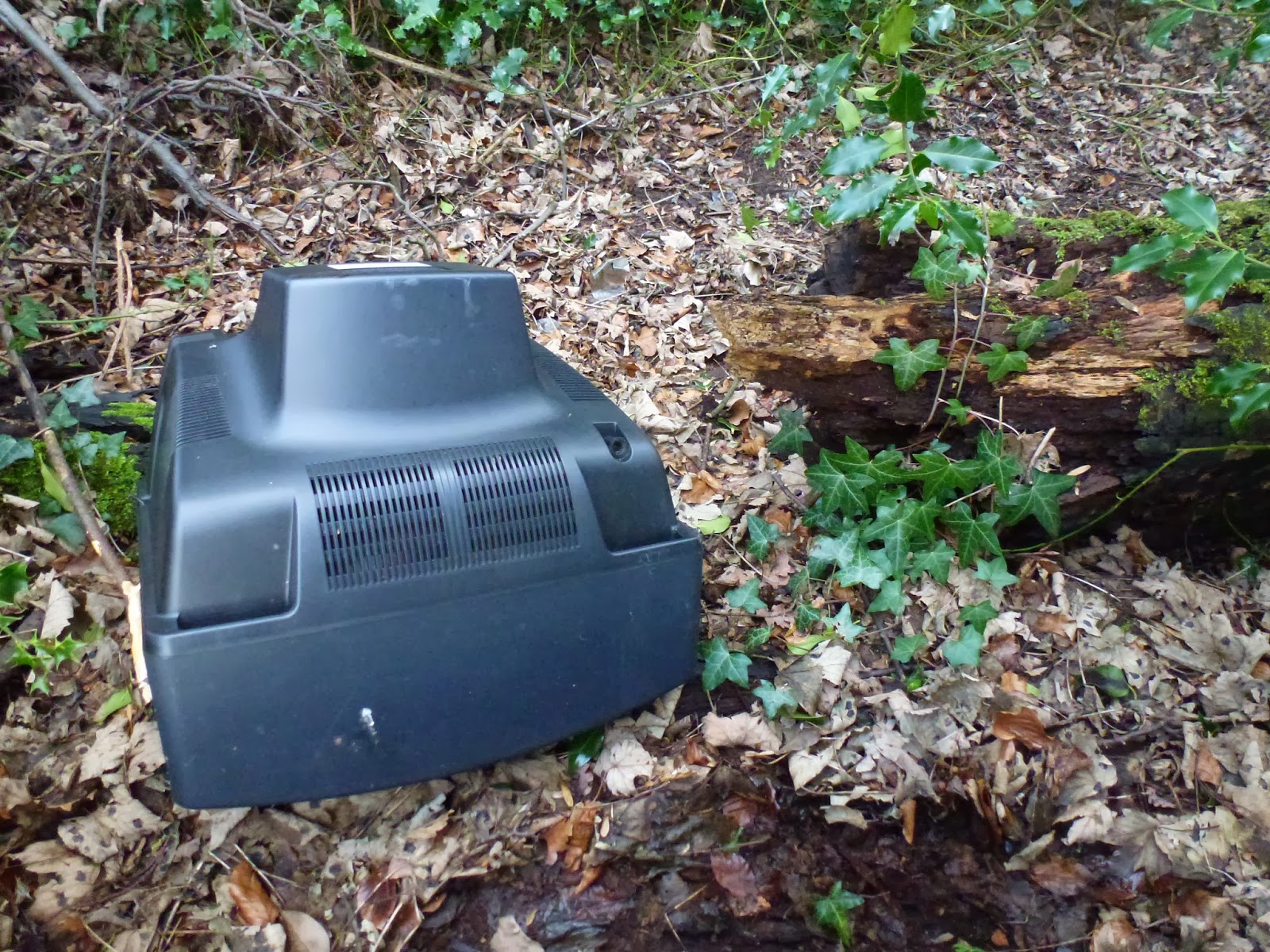 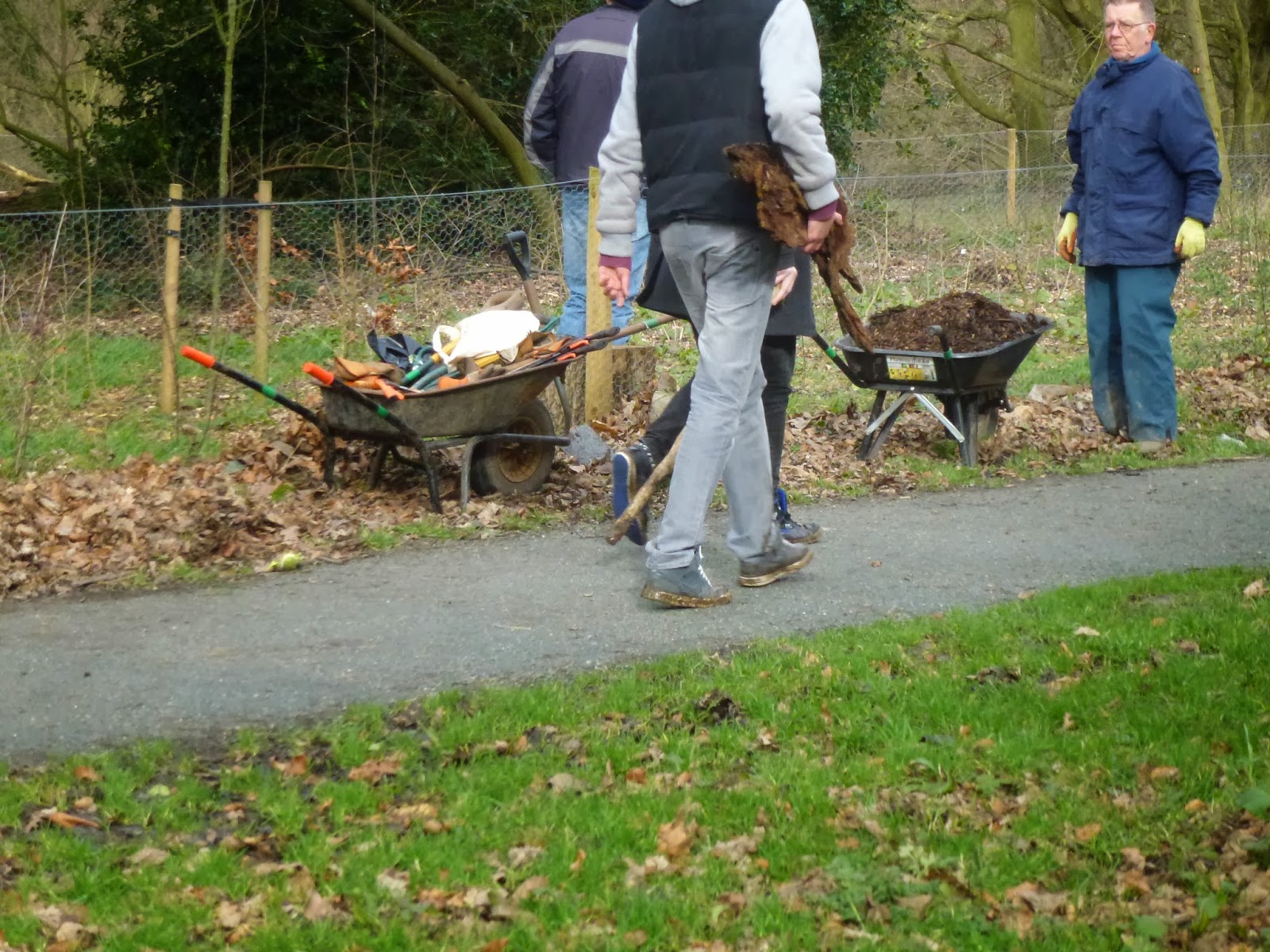 
The Friends of Bedfords Park meet monthly, on the 2nd Sunday, at 10.00a.m. in the Visitor Centre.

All are welcome to join us for the day, or for as long as you like. If you plan to be with us all day don't forget to bring food and drink, although there are usually sandwiches and drinks available in the Visitor Centre.

We will usually be creating or clearing footpaths, cutting back shrub, clearing ponds, removing saplings etc. Obviously this all depends on the weather and ground conditions but you can expect to get your hands dirty! We supply tools and gloves but please ensure you have your own sturdy/waterproof footwear.

For further information contact Lois or Bill on 01708 704619. We do have an email address: fobp@hotmail.co.uk so you can contact us on this also. Replies may take longer than a phone call as email may not be checked daily.